The end of September was an important time for the deaf community in Brazil (and the international community). While the “International Week of the Deaf”, the “National Day of the Deaf” in Brazil and the “International Day of Sign Languages” coincide in a fortnight, Lew’LaraTBWA and Banco de Brasil decided to design a campaign that would commemorate the 10 million deaf and hard of hearing citizens of Brazil through a performance in Brazilian Sign Language (BSL): “Libras”.

Combining the movements of Libra in a dance performance, “There Are 10 Million of Us” shows how hearing-impaired people are just like everyone else – and is performed entirely by deaf and hard-of-hearing performers. The communications were co-created with deaf actors and with advice from the NGO Turma do Jiló, and are designed for hearing-impaired viewers – rather than able-bodied people, like most commercials. This means the spot is an exercise in empathy for the majority of viewers as they have to read the subtitles, while the deaf community who speak fluent Libra can follow sign language, rather than watch a BSL interpreter. picture in picture or read captions themselves.

The cast was chosen to portray the diversity within the deaf and hard of hearing community, including people who communicate with Libras, oral speakers; people with cochlear implants or hearing aids; and lip readers – as well as demonstrating a range of intersecting ages, appearances, genders, races and ethnicities. The film shows how, like everyone else, they have their own favorite hobbies and movies – and they make money and deserve a bank that can provide full Libra service.

To go behind the scenes of this campaign and discuss how Banco de Brasil and Lew’LaraTBWA have authentically connected with deaf and hard of hearing Brazilians, LBB’s Ben Conway spoke with the ECD of the creative agency, Rodrigo Tortima, and artistic director, Natalia Calvoso.

LBB> Where did the initial idea for this campaign come from? What did the brief look like and what were the immediate ideas that came to mind?

Rodrigo and Natalia> The briefing asked us to introduce Banco do Brasil’s new customer service tool in Brazilian Sign Language – ‘Balance’. This allows deaf and hard of hearing people to communicate via BSL virtually and in real life at any branch of this bank. Initially, we thought of making an entirely silent film, so that hearing viewers could experience and understand the difficulties encountered by this community. However, through research and knowledge from our planning area, we have found that there are over 10 million deaf and hard of hearing people in Brazil, forming a true nation within a nation. It was then that the idea of ​​designing a campaign by and for them was born, featuring the members of this community as protagonists, instead of small players.

LBB> How did you work with the Turma do Jiló and choose deaf artists?

Rodrigo and Natalia> The consulting services of the NGO Turma do Jiló were crucial from start to finish. Without them, we would have unknowingly stumbled into capability gaps. And when it comes to a new style of communication, we have learned together how to create best practices all the way, including everyone. Our partner who produced the film, Boiler, reached out to casting production houses specializing in non-actors, alongside extensive social media research, dance groups and recommendations from Deaf community event hosts. .

LBB> How does the campaign try to show that people with hearing loss are like everyone else?

Rodrigo and Natalia> We have written a manifesto in which the deaf and hard of hearing talk about the details of their daily lives, how they watch series, get emotional, wash clothes, walk the dog, pay their bills and have a bank that they can be trusted, like anyone else. We also showed that many of them enjoy music and dancing, contrary to what people might expect. We have endeavored to show how natural this condition is for them and how they have exactly the same needs as the hearing community.

LBB> How did you write the “copy” in Brazilian sign language for the spot? Why did you choose Libras as your main means of communication, without voiceover?

Rodrigo and Natalia> Brazilian Sign Language has many specific characteristics, so we sought advice from Turma do Jiló and translators, setting the tone of the text and pacing the words to fit the advertisements. Everything in this film speaks of the active roles played by this community. We decided that BSL would be the main form of communication in this spot precisely to promote this concept. We didn’t want to compete with anything else. In fact, we only added subtitles because we didn’t want to exclude a large segment of the deaf community who don’t use BSL.

During this process, we learned that Libra goes far beyond just waving their hands. At the same time, it is closely related to dance, as a beautiful means of physical and cultural expression. We had an incredible pair of choreographers, who worked with the Turma do Jiló performers during rehearsals and filming. The main guides were the light signals and the vibrations of the ground, keeping everyone in step.

LBB> What was the media placement strategy?

Rodrigo and Natalia> The proposal was designed to increase video views. Due to the characteristics of the selected media (digital, television and cinema), we were able to generate a greater sense of closeness, developing a more powerful dialogue between the subject and its target markets. We focused on creating proximity and dialogues with viewers on the subject of accessibility.

In digital, there were two fronts:

Rodrigo and Natalia > Even before the Libras sign appeared in the Banco do Brasil logo, we already thought that such an emblem was overdue. Surprisingly, the actors spontaneously came together during rehearsals and created the official sign, inspired by the bank’s logo. 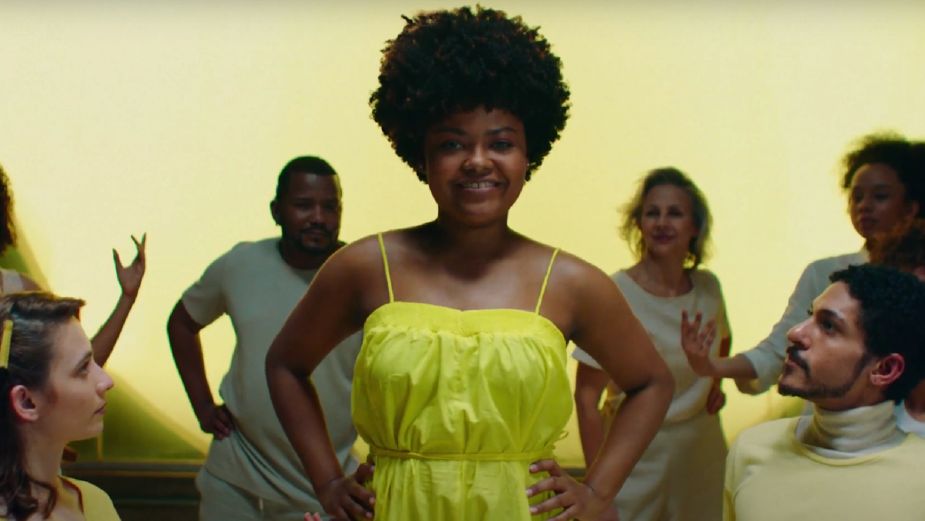 Rodrigo and Natalia> Yes, we were there throughout the process, from rehearsals to filming. The process was organized and carried out with a very light touch by a fantastic director, Liv Stacciarini, and the production house Boiler. We were shooting on two sets simultaneously for an entire day, with the support of an equally amazing second director, Nico Matteis. The cast was split into two groups which switched places on the sets. This whole process has been very rewarding as a learning exercise. Living with this community has become a key factor for us. This is a very diverse community of deaf and hard of hearing members with varying levels of hearing loss, so the group differs in many aspects, such as cochlear implants. We found Deaf culture to be beautiful and they are all very proud of it.

LBB> How did you react to the final track? What is your favorite shot or moment from the spot?

Rodrigo and Natalia > Everyone reacted very similarly the first time we watched it, the emotion turning into tears and thanks. There has never been a project with this atmosphere. It’s very hard to pick one moment from this movie, because they were all wonderful. But I think the “We have bosses, we are the bosses” part when the cast performs “face to face” choreography is particularly moving.

LBB> How does the campaign aim to support people with hearing loss beyond International Week of the Deaf?

Rodrigo and Natalia> It is very important that these people know about this tool offered by Banco do Brasil. While this is just a small step towards a more accessible world, it can inspire more and more initiatives that really make life easier for the deaf community – and people living with other disabilities too. . By spotlighting this banking service in a campaign that puts its recipients in prominent roles, we are also bringing this community into the communications industry, breaking down barriers and opening doors. That’s the beauty and power of this project.

LBB> What was the biggest challenge you faced in this campaign and how did you overcome it?

Rodrigo and Natalia> The hardest thing was getting out of the world of abstraction and materializing the concept. How would this mixture of BSL and dance be orchestrated? At times, it was very difficult to predict exactly what this project would look like, until we saw all of our references compiled on a storyboard, close to the day of shooting. But with a lot of dedication, study and passion, we achieved our goal. Despite the difficulties of producing something so unprecedented, everyone involved imagined an incredible and poetic result, honestly believing in this project from start to finish. It made all the difference. He made it happen.