1. What is your favorite bookstore or library?
My favorite bookstore is a kiosk in the Iranian National Oil Company Resort by the Caspian Sea. We used to stay there all summer, every year from the age of 6 until I was sent to Trinidad at the age of 13. I spent all my weekly allowance buying books at this kiosk. The resort, as it existed, was destroyed when Iran fell under the tyrannical rule of the Islamic Republic (no more women in bikinis, no more evening concerts, outdoor movies or men and of women dancing together by the sea). the beloved kiosk is still intact in my memory, stuffed with paperbacks and magazines, smelling of the vanilla scent of paper mingled with the damp aroma of the salty sea. The mustachioed salesman appreciated my voracious appetite for books. If my meager budget didn’t fully pay for a book, he let me have it anyway and snuck it back from my father when he bought his daily newspaper.

2. What is part of Abacus of loss which came as a challenge to write?
All. It was difficult to open myself to the world. To lay bare my deepest desires, my traumas, my shames and my dreams. And further, to do this without bashing others, holding grudges, or blaming that person, that family member, or fate, for my own flaws and disappointments. I tried not to do that. Instead, I’ve told my life story in a way that invites you, the reader, to see our commonalities and take the journey with me as a traveling companion through life.

“The movement of history does not conform to the common map of space and time because memory does not conform to such restrictions. Thus, the carefully arranged form of these memoirs allows you, the reader, to enter a landscape that is both clear and blurred, concrete and abstract, here and not here, mine but also yours.

3. How did you come up with the abacus symbol?
The abacus is an instrument of memory. You slide the beads up and down the rods to add or subtract, total, and tally. Each section of this memoir is a stem, and each memoir, a pearl.

4. Abacus of loss is structured in sections, which are then broken down into “beads”. Over the sections, these pearls are linked together, evoking jewellery. Why call each of these poems “pearls” and how does naming them “pearls” change the way the reader interacts with the work?
Every pearl in Abacus of loss advances the story of my nomadic life – counting losses and gains as I lead the reader deeper and deeper into my life, memory by memory. The prose tells my story in a concerted way; poetry opens a space for you to join the journey, and ultimately make it yours as well.

5. Why did you decide to write a memoir in verse? What can verse accomplish in a memoir that prose cannot?
I wanted to tell my story as I had experienced it, and I wanted to draw the reader into that experience. So I created a form that matched my vision. Let me explain. The movement of history does not conform to the common map of space and time because memory does not conform to such restrictions. Thus, the carefully arranged form of this memoir allows you, the reader, to enter a landscape that is both clear and vague, concrete and abstract, here and not here, mine but also yours. Ultimately, like the sum of all life in nuggets of memory, it all comes together, and despite loss and sadness, exile and displacement, love and betrayals, we don’t end up in discouraged darkness but in a place filled with light and hope. I call gratitude.

“What inspires me is the freedom to move fearlessly through artistic forms and genres. I am the sum total of what I want to be: a poet, a playwright, a librettist and a literary translator .

6. A recurring pattern in Abacus of loss is pistachios. They are shared between lovers as well as between parents and children. Why do you come back so often to pistachios? Is there something intimate in the opening of a nut, revealing what is hidden by the shell? 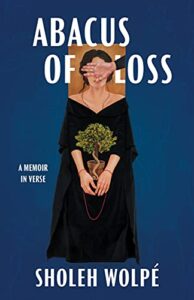 It makes me laugh. Yes, you’re right. But life is like a pistachio, isn’t it? Hard and soft at the same time. Welcoming but reserved. Seemingly hard to split, but once you crack it open, you’re rewarded with a sweet, meaty secret. If I could rewrite Eve’s story, she wouldn’t bite into an apple. She was breaking a pistachio.

seven. When did you realize you wanted to be a writer? What influenced you and who influenced you?
Confession: I was a terrible student in Iran. Except for literature, of course. I just didn’t see the world the way they said I would. For example, I didn’t like memorizing historical events without knowing the intricate details of why and how it happened. I wanted the stories. Instead, I was offered “facts” and “dates”. This infuriated my teachers. Too often they sent me to the principal’s office. They said I was a troublesome child. But the truth was, I was a curious kid who liked to create worlds in her head. I wrote plays and convinced my little cousins ​​to perform them on lazy summer afternoons when my extended family gathered for lunch.

Every year, my father sent me to a week-long summer camp in the Alborz mountains. Such happy times. One year I wrote and directed most of the evening entertainment shows. I was 12 years old. I never said to myself: I am a writer. I was simply.

My favorite poet was Forugh Farrokhzad. But his poems were forbidden to me. “Not appropriate for a young girl,” my father said. As if that stopped me! I stole a collection of paperbacks from my aunt’s library, hid it under my mattress, and read her poems with a flashlight. Today, this book is my only surviving possession from Iran. (Sorry Aunt, if you want it back… well, you should catch me first.) Back then, if someone had told me that I would grow up to translate Forugh Farrokhzad and win an award for it, I would have laughed my a#% off. The book: Sin – Selected Poems by Forugh Farrokhzad (University of Arkansas Press.)

8. What does your creative process look like? How do you maintain momentum and stay inspired?
What inspires me is the freedom to move fearlessly through artistic forms and genres. I am the sum total of what I want to be: a poet, a playwright, a librettist and a literary translator. In song of me, Walt Whitman writes: “I am great, I contain multitudes.” That’s how I feel all the time when it comes to my art. I’m not afraid to experiment. I’m not afraid to fail. And I express it clear as glass in Abacus of loss:

“Loss is a language / we all speak well, / a bodily groan that resounds / between the ribs, the fall / that becomes a boon.”

“This is how creativity takes us forward, step by step, not just up or down, sideways, forwards or backwards, but also bouncing back in time.”

9. In addition to writing your own poetry, you have translated four books of poetry. Does translation play a role in your writing practice? How did it shape your poetry?
Literature bridges cultures. So for me, translation is above all a service.

As a poet, when you translate, you have to cut into the marrow of a literary text and consider all the possibilities of its recreation in another language and culture. How can that not help you become a better writer? A more careful observer? A better blacksmith?

I translated recently The Bird Conference (WW Norton) by 12e Iranian Sufi mystical poet of the century, Attar. The epic poem is a soul-changing masterpiece. This is a masnavi, a poetic form invented by the Persians, and consists of a total of 4,724 couplets. I don’t believe it’s possible to transfer thousands of rhyming verses into 12th century Persian into formal rhyming verse in English without sacrificing the magic of the original work. Therefore, I spent 3 years recreating Attar’s epic poem in an accessible and poetic form. This construction later informed the structure that I created for Abacus of loss. This is how creativity takes us forward, step by arduous step – not just up or down, sideways, forwards or backwards, but also bouncing through time.

ten. How can writers influence resistance movements?
“Here are the octopuses of war / tentacles wielding guns, missiles / holy books and colorful flags. / Do not fill your pens with their ink. / Write with your fingernails, scratch / light up those dark days.

Sholeh Wolpe was born in Iran and lived in Trinidad and the United Kingdom before moving to the United States. His most recent book, Abacus of Loss: A Memoir in Verse (Univ. of Arkansas Press) is hailed by Ilya Kaminsky as a book “that has created its own genre – lyrical thrill combined with narrative charm”. His literary work includes more than a dozen books, several plays and an oratorio/opera. Sholeh is currently Writer-in-Residence at the UCI. She divides her time between Los Angeles and Barcelona. For more information on his work, visit his website.

A lively ONS gala celebrates the extension of the Noseda era